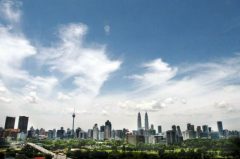 Calling them irresponsible quarters, Abdul Rahman said the naysayers had made many predictions and forecasts that the nation’s economy was on the brink of collapse.

“They said the government was going bankrupt, investors were fleeing the country and many more but they have been proven wrong over and over again.

“Today’s figures released by the Statistics Department has reasserted that these people are not to be taken seriously when they are talking about our national economy,” he said in a statement today.